"The last hope for the Special Tactical Fighter Squadron Scarface . . . All information on this aircraft remains classified at the highest level"
― Ace Combat Facebook page[2]

The XFA-27 is a unique multirole aircraft. It was one of the first original aircraft designs to be featured in an Ace Combat game, specifically Ace Combat 2 in 1997, alongside the ADF-01 FALKEN and XB-10. Since its original appearance, it has mostly been restricted to handheld titles.

In March 2015, the XFA-27 was added to Ace Combat Infinity, its first home console appearance in 18 years. Along with the R-101 Delphinus #1, the XFA-27 was a late-game aircraft available at the far end of the Aircraft Tree, requiring an exorbitant amount of credits to unlock and upgrade.

The XFA-27 adopts a sleek, angular design with variable geometry wings and high-output engines, giving it an extreme level of maneuverability and acceleration. A distinguishing feature of the jet is its ability to release four missiles in quick succession. Its cockpit uses COFFIN in a very limited degree, employing cameras beneath the cockpit to ensure maximum visibility while retaining a conventional glass canopy.

The aircraft's specifications are as follows:[3]

The XFA-27 was developed in haste by the Usean Allied Forces as their "last hope" to defeat the Usean Rebel Forces during the Usean coup d'état. The aircraft was given to Phoenix, who was similarly hired as a last-ditch effort to quell the rebellion.[2]

"A carrier-based stealth fighter designed for ultimate performance. All information about its development, including its manufacturer and country of origin, is highly classified and has not been made public. The aircraft has a remarkably unique design for a stealth fighter. In the front, it sports all-moving canards, four tail wings (with two above and two below the engines), and variable sweptback wings that can adapt to a range of speeds. In the rear, horizontal paddle-type thrust vectoring nozzles are equipped on its twin-engine thrusters, giving it both mobility and stability. The aircraft also boasts unparalleled battle capabilities; multiple-launch Joint Strike Missiles can lock onto both air and ground targets, allowing a concentrated attack on a single target or a dispersed attack against multiple targets. Its sophisticated electronic warfare system offers both support and interference that give the upper hand in all kinds of combat situations, even solo raids. Equipped with a full spread of cutting-edge technology, this aircraft demands an equally exemplary pilot who can bring out its full potential."
― Hangar

Hangar view of Skin 07
Add a photo to this gallery

"A carrier-based stealth fighter which has been developed with the aim of creating an aircraft that can demonstrate extreme performance. Information on the country of origin and manufacturer has not been made public, making this a highly classified aircraft. Featuring an all-moving tail, canards and unique vectoring nozzles, it is capable of excellent maneuverability. It comes equipped with MSTM (Multiple-Launch Standard Missile) which can inflict significant damage, but requires the skills of a veteran pilot to use efficiently."
― Hangar

The XFA-27 is unlocked through the Aircraft Tree.

An XFA-27 in Solvalou colors over Tokyo

Complete the game once on Easy difficulty.

Scarface 1 - Found in Operation X. Spawns after one ADF-01 remains. 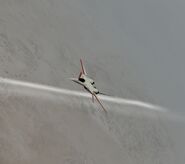 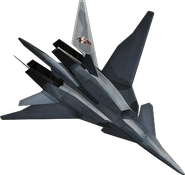 "The ultimate fighter said to be Scarface's trump card. Can we consider it to be an experimental (X) combination of fighter (F) and attacker (A) aircraft characteristics? The developing countries and manufacturers are top-secret, and all details are wrapped behind a dark veil."
― NamCollection Museum[1]

Destroy the Fox Force Four squadron in "Dead End", or destroy Xiao, Jian, and Dao in "St. Elmo's Fire" and complete the mission in Extra mode in any difficulty. Costs $500,000.

Retrieved from "https://acecombat.fandom.com/wiki/XFA-27?oldid=263871"
Community content is available under CC-BY-SA unless otherwise noted.