is a modified version of the XFA-33 Fenrir with a special skin featuring the livery of Alect Squadron. It only appears in Ace Combat Infinity as a Special Aircraft. 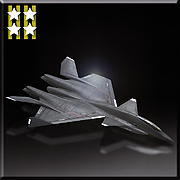 "A special version of the XFA-33 based on the elite squadron from the air force of a powerful military nation.
It features incredible power in close-combat and turning capabilities pushed to the very limit. Use of long range missiles also enable it to strike from afar, allowing for complete domination of the battlefield.
Members of the original squadron had complete confidence in their own abilities and this was made apparent in their condescending attitudes towards allies from other squadrons."
― Hangar

The aircraft was available to the top 200 players in the "End of Deception" Team Deathmatch Ranking Tournament in December 2015
The aircraft was later made available in the Skilled Pilot Medal exchange program. Players can exchange 100 medals to acquire the aircraft.

Nickname
Upgrading this aircraft to Level 20 unlocked the Mr. Elite nickname for use at any time.

An -Alect- flying over Tokyo

An -Alect- flying over the Adriatic Sea

Retrieved from "https://acecombat.fandom.com/wiki/XFA-33_-Alect-?oldid=247962"
Community content is available under CC-BY-SA unless otherwise noted.