The XFA-33 Fenrir (or simply Fenrir on the handheld games) is an original next-generation combat aircraft developed by Leasath in the Strangereal universe. It made its first console appearance in Ace Combat Infinity, previously debuting on the handheld Ace Combat X: Skies of Deception and Ace Combat: Joint Assault.

The aircraft is named after a mythical wolf from Norse mythology, and the son of Loki. Odin's son, Víðarr, slays Fenrir in battle. This is referred in the Ace Combat X medal "The Mark of Vioarr", earned by completing either "End of Deception I" or "End of Deception II".

The Fenrir is known for its large airframe. The Fenrir's wings utilize a polyhedral cropped delta configuration with bent wingtips, a V-tail, canards, and dual air intakes. The frontal landing gear is housed within the mouth-like pod beneath the cockpit. The Fenrir uses dual thrust vectoring engines, aided by a smaller power plant between both, which give it VTOL capabilities.[1]

The aircraft uses Connection for Flight Interface hardware for control. The cockpit features a dashboard with a digital interface that displays vital information of the aircraft, along with a 3D render of Fenrir. Depending on the game, this 3D render acts as a compass (Ace Combat X and Infinity) or to show the aircraft's position in a virtual space (Joint Assault).

The Fenrir was primarily designed to operate as a testbed for experimental military technologies researched in Leasath, including a downsized and improved version of the optical camouflage system used by the Gleipnir. The Fenrir's improved camouflage system also reduced its engine noise, further improving its stealth capabilities.[1] Unlike the Gleipnir, the Fenrir's optical camouflage system required a ground-based energy emitter to function. It retained the vulnerability of malfunctioning from damage feedback and, if the Fenrir suffered critical structural damage, would be disabled entirely.

Fenrir's main weapons consist of dual autocannons and short-range missiles. Fenrir could be additionally equipped with special air-to-air and air-to-surface missiles, as well as a small-scale version of the Gleipnir's SWBM.

Leasath also developed a new microwave weapon to equip onto the Fenrir units. The system functioned through the intersection of microwave energy beams generated by a nearby ground station and the Fenrir itself, creating a ball of high-intensity microwave energy that homed in on the engines of enemy aircraft. The energy would overheat the engines and fuel systems, eventually causing the target aircraft to explode.

Leasath created Fenrir under Diego Navarro's instructions following the destruction of the Gleipnir over Santa Elva. The aircraft was created using battle data acquired by the airborne fortress.[2] The aircraft's production and development was held at Sentry Island, within Archelon Fortress.[3]

Following Fenrir's completion, Navarro contacted the elite Alect Squadron to pilot 4 of the finished units. The squadron would reach Archelon Fortress via the Danern Straits. Additionally, a new weapon, the High-Powered Microwave, was also being developed and transported for use by the aircraft.[4]

While the Alect Squadron successfully reached the stronghold, the HPM was destroyed while it was being transported from Cobalt Cave.[6]

Once the Aurelian Air Force's Gryphus and Aquila Squadron had reached Sentry Island, Alect Squadron, now piloting Fenrir, quickly took off. In a hectic dogfight, all Alect pilots were shot down. However, another Fenrir, holding valuable data from the battle, was taking off from within Archelon Fortress but was quickly shot down by Gryphus One. The fortress was soon engulfed in flames.[7]

With the destruction of the fortress and the Fenrirs playing live at Navarro's unveiling event, the citizens watching the live broadcast became outraged. They stormed in on him and destroyed the Fenrir model that was presented in the stadium.[8]

After the war, much of the intact remains were retrieved from the ruins to be inspected by Aurelian engineers. It was then reproduced for research purposes, without the VTOL and optical camouflage systems, resulting in lighter airframes with more maneuverability.[1][3]

Details of the XFA-33 Fenrir's creation are scarce. All that is known is that it was developed by a small country in the Southern Hemisphere, for the purpose of showcasing the advanced technologies of their military-industrial complex. However, after the fortress which served as the XFA-33's development facility was destroyed, another nation retrieved the aircraft's remains and reproduced it.[9]

Later, Wernher and Noah Enterprises came to possess the designs and used their Advanced Automated Aviation Plant to reproduce it and make it available to mercenaries worldwide, where it found limited success.[10]

"A large-scale special attacker aircraft developed by a small country in the southern hemisphere. It was originally created as a demonstration aircraft to display the high-level technical capabilities of a military-industrial complex, but the fortress which acted as a base for the aircraft's development and production was destroyed. A certain country discovered the remains of the aircraft and reproduced it for research. Unlike the prototype aircraft, it doesn't come equipped with optical camouflage or VTOL systems, but it's lighter and features improved maneuverability, resulting in an aircraft that is more suitable for real combat."
― Hangar

The Fenrir is available through the Aircraft Tree.

Desert brown body with with black trim and nose; based on the Special 2 color from Ace Combat X: Skies of Deception

"A special attacker with mysterious capabilities and amazing maneuverability."
― Hangar

"A special attacker aircraft developed by Diego Navarro as the Leasath Army's trump card. Equipped with an optical camouflage system that was further developed from the Gleipnir, it was able to disappear and mask its noise. However, this model was rebuilt for research purposes based on the remnants of Archelon Fortress that the Aurelian Army destroyed. Because of this, the optical camouflage and VTOL systems were not reproduced, but its weight has been reduced and it features improved maneuverability."
― Ace Combat X: Skies of Deception - The Complete Guide 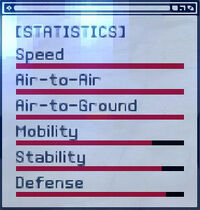