View source
watch 02:56
Raise a Floppa - The Loop
Do you like this video?
Play Sound
pencil
All right, gentlemen, it's time to clean house!
This article or section may require a cleanup to meet Acepedia's quality standards.

The Game is capable of performing any task that a pilot can dream of. Its airframe, avionics and armament systems are extremely advanced and the aircraft employs a unique tailess system. During flight, the 3D thrust vectoring and near-vertical wingtips make up for the lack of vertical fins. As the Game breaks the sound barrier, the wingtips hinge downwards and pivot to maintain maneuverability and stability.

The aircraft's specifications are as follows:

The XFA-36A is first deployed by the General Resource Defense Force in mid-2040 just before major GR operations begin. It was the XFA-36A which took part in the famous "Operation: Hit and Run" and lead the GRDF attack on Port Edwards. Eventually, the terrorist group Ouroboros began to use these fighters. They were deployed sporadically during their operations, but were seen in full force during the attack on Megafloat. One of General Resource's best aces, Keith Bryan, used one airframe during the Ouroboros crisis until he rammed the wing section of the X-49 Night Raven with it, allowing Nemo who recently deserted from Ouroboros to shoot down the Night Raven and its pilot, Rena Hirose. 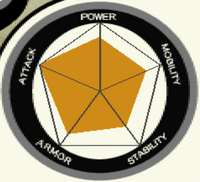