"The only female pilot in the squadron, she had Yellow Thirteen's absolute trust as his wingman."
― Side Story Narrator[1]

Yellow 4 (黄色の4 Kiiro no Yon), or Yellow Four, was an Erusean fighter pilot and second-in-command of the 156th Tactical Fighter Wing "Aquila" (Yellow Squadron). She was the only female member of Yellow Squadron and a close friend to Yellow 13, the squadron's flight leader, whom she defended to a fault.[1]

Yellow 4 took part in many of Yellow Squadron's early engagements against the Independent State Allied Forces during the Continental War. She was shot down and killed by Mobius 1 during the ISAF's second assault on Stonehenge.[2]

"He spoke of when she was just a girl - before he trained her, before she became a fighter pilot."
― Side Story Narrator[3]

Little is known about Yellow 4's life prior to the war. However, Yellow 4 presumably joined the Federal Erusea Air Force sometime after Yellow 13. She is known to have met Thirteen at a relatively young age, who later trained her to become a fighter pilot; exactly how young she was at the time is unknown.[3] Eventually, Four was promoted to second-in-command of Yellow Squadron and remained one of the squadron's permanent members despite frequent crew rotations.[3]

"Despite having a gentle demeanor, I could tell that the wingman would never allow danger to get near Yellow Thirteen, even on land."
― Side Story Narrator[4]

As Erusea invaded San Salvacion and occupied the Stonehenge railgun facility, Yellow Squadron took part in various offensive operations against the ISAF. Following the collapse of the X-02 Wyvern project, FEAF command reassigned Yellow Squadron to defend the railgun weapon.[4] When the ISAF attempted an air strike on Stonehenge, Yellow 4 and her squadmates sortied and shot down all the incoming fighters, which precipitated the ISAF's full retreat to the east.[5]

Following the ISAF's withdrawal from the Usean mainland, Yellow Squadron was reassigned to San Salvacion and commandeered an unfinished highway as its makeshift air base.[4] Over the next few months, Yellow 4 would participate in several long-range engagements with ISAF forces in the east. In one such mission, Yellow 4 participated in the routing of ISAF fighters that had attacked an Erusean petrochemical complex north of Comberth Harbor.[6] Several months later, Yellow 4 and other Erusean fighters were present over the Comona Islands in an attempt to disrupt ISAF's Operation Countdown; however, Four and the rest of her squadron were forced to retreat after Mobius 1 successfully damaged one of her wingmen's aircraft.[7]

Between sorties, Yellow 4 and her squadmates spent their downtime in a local San Salvacion bar. Four's loyalty to Yellow 13 was unwavering: she always kept a close watch on Thirteen and his surroundings and protected him to the best of her ability. It is unknown if Yellow Squadron or the Erusean occupation forces were privy to the presence of a resistance movement within the city, but Four remained watchful nevertheless.[1]

"No matter what, she can't complain. She went up with her plane in disrepair. Pilots are responsible for their planes."
― Yellow 13 to the Side Story Narrator[3]

On April 2, 2005, the San Salvacion resistance detonated a bomb on Yellow Squadron's runway. Yellow 4 sustained nonlethal shrapnel wounds, and one of her Su-37 Terminator's engines was partially damaged.[8] Soon afterward, the squadron received reports that the ISAF was attempting another air raid on Stonehenge. Yellow 4, disregarding her injuries and damaged engine, sortied with her fellow Yellows.[8]

While en route to Stonehenge, Yellow 4's aircraft struggled to maintain formation with the rest of her squadron, which significantly delayed their arrival. By the time they reached the airspace, it was too late: the entire STN facility had been destroyed.[2] Regardless, Yellow 13 ordered Four and the others to engage the ISAF fighters who, instead of retreating as they had before, engaged as well. After a short dogfight, Mobius 1 overtook and shot down Yellow 4. She failed to eject from her plane before it exploded and was killed instantly.[2] 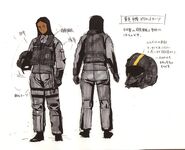 Retrieved from "https://acecombat.fandom.com/wiki/Yellow_4?oldid=265481"
Community content is available under CC-BY-SA unless otherwise noted.