Yellow 4
At least five other members

"They were the elite flight squadron, chosen to protect the cannon"
― Side Story Narrator[1]

The 156th Tactical Fighter Wing "Aquila", more popularly known and referred to as "Yellow Squadron" (黄色中隊 Kiiro Chūtai), was an elite squadron of the Federal Erusea Air Force (FEAF). The squadron's primary role was the defense of Stonehenge during the Continental War.

In the years leading up to and during the war, Yellow Squadron became notorious among the Independent State Allied Forces for its members' extraordinary combat skills. For the first half of the war, ISAF engagements with Yellow Squadron were strictly prohibited.[2] ISAF's ace, Mobius 1, would later engage the Yellows over Stonehenge and the Erusean capital, Farbanti, leading to the squadron's disbandment after all of its members were killed in action during Operation Autumn Thunder.[3]

Yellow Squadron is believed to have existed prior to the continental war, but any records of the squadron's previous engagements are unknown. At some point, Yellow 13 was promoted to the role of flight leader, with Yellow 4 as his permanent wingman; the other squadron members were regularly rotated out by FEAF command to reinforce other squadrons and boost troop morale.[4]

In the late 1990s and early 2000s, development of the FEAF's X-02 Wyvern project was well underway. Upon Erusea's capture of Stonehenge in 2003, the Erusean High Command ordered the production of several X-02 units for the purpose of defending Stonehenge. This plan was met with heavy opposition from certain groups, including the Erusean Parliament, which argued that more conventional aircraft would be better suited to the task rather than an experimental one. The X-02s become tangled in bureaucratic debate and were not completed until after the war's end; Yellow Squadron would consequently become the primary protectors of the STN facility flying Su-37 Terminators with camouflage livery.[1]

At some point in early 2004, during the Allies' retreat across the Usean mainland, ISAF deployed several squadrons to attempt an assault on Stonehenge. Before any of the aircraft could reach the operational zone, however, Yellow Squadron engaged and shot down all of the ISAF pilots. ISAF declared the mission a complete failure and was ultimately forced to continue its retreat to North Point.[5] Following the ISAF's evacuation from the mainland, the need for Yellow Squadron waned as the frontlines shifted to the far eastern coast of Usea, effectively putting Stonehenge out of range from further ISAF air strikes.[1][6]

Following the success of Erusea's continent-wide offensive, Yellow Squadron was assigned to several long-range missions from its newly acquired runway and makeshift air base in San Salvacion.[1] When the ISAF launched an attack against the Aegir Fleet's refueling facilities outside of Comberth Harbor, Yellow Squadron was deployed to intercept the ISAF fighters. Although they failed to prevent the attack, Yellow Squadron was able to splash multiple ISAF aircraft, forcing them to withdraw from the combat zone.[2]

Less than a month later, ISAF attempted to launch a new reconnaissance satellite from the Comona Islands. A massive aerial engagement soon broke out over the launch site. Yellow Squadron was among the numerous Erusean air forces attempting to halt the launch; however, the Yellows collectively retreated after Mobius 1 damaged one of their wingmen.[7]

As the war progressed, the ISAF began counteroffensive operations to regain lost territory and eventually ordered a second assault on Stonehenge. Before the air raid commenced, however, a member of the San Salvacion resistance detonated a bomb on Yellow Squadron's runway; the explosion inflicted light shrapnel wounds to Yellow 4 and damaged one of her Su-37 Terminator's engines. The bombing delayed Yellow Squadron's response when the call to defend Stonehenge was made.[8]

Similar to the raid on the petrochemical complex several months earlier, Yellow Squadron failed to arrive in time to prevent the STN's destruction but proceeded to engage the ISAF pilots nevertheless. Mobius 1 engaged the Erusean aces and managed to shoot down Yellow 4. After confirming she had failed to eject, Yellow Squadron retreated from the airspace.[9]

"It's the Yellow Squadron! Looks like they've come to make a last stand for Erusea."
― AWACS SkyEye[3]

Following Yellow 4's death, FEAF command continued to cycle new pilots through Yellow Squadron's roster in hopes of bolstering their ranks and strengthening the squadron in preparation for ISAF's push into the mainland.[10] By July 2005, ISAF forces had reached Erusean-occupied San Salvacion and began an operation to liberate the city.[11] Yellow Squadron was deployed around the city's airspace, but the battle eventually turned in ISAF's favor, and the Erusean forces retreated once more.[12][13]

By fall of 2005, the ISAF forces had broken through the Eruseans' Whiskey Corridor defense line and arrived at the outskirts of Farbanti. The ensuing battle ultimately ended with ISAF ground troops capturing the Erusean General Headquarters while Erusea's military leaders—including the Supreme Commander—attempted to escape via helicopters.[3] The remaining members of Yellow Squadron, including Yellow 13, scrambled to defend the helicopters and shoot down ISAF's ace, Mobius 1. In the ensuing dogfight, Mobius 1 shot down and killed all five Yellow pilots.[3][14]

Despite the war's official end on September 19, 2005, a splinter group of Erusean officers refused to accept the ceasefire's terms and took control of Megalith, a rocket-launch facility capable of turning asteroid fragments into weapons of mass destruction. ISAF quickly organized the new Mobius Squadron—comprised of Mobius 1 and other veteran ISAF pilots—to perform a joint ground-air operation to destroy Megalith.[15]

In response, the Erusean rebels rallied a new squadron to defend the facility, led by Jean-Louis Flaubert and his second-in-command, Gene. The squadron was comprised of 15 pilots, each flying Su-37 Terminators with the same livery as Yellow Squadron. The defense force was also named "Yellow Squadron" out of respect for the aces lost during the Siege of Farbanti one week prior.[16] However, the defending pilots did not possess the skills or training of their squadron's namesake and were shot down in the ensuing dogfight; Megalith was subsequently destroyed as well.[15] This defeat marked the end of Yellow Squadron's legacy.

On June 30, 2020, replica Yellow Squadron aircraft were showcased on a runway at Redmill Air Force Base alongside the aircraft of Strider, Sol, Mobius, Garuda, Avalanche, Strigon and Galm squadrons at a ceremony commemorating the 25th anniversary of the end of the Belkan War hosted by the Osean Federation.[17]

Yellow 13 was the flight leader of Yellow Squadron throughout its known tenure. He was considered to be the best fighter pilot in the Federal Erusea Air Force, but his true source of pride came from his record of never losing a squadmate in combat.[1] He also held contempt for those who would sabotage pilots while on the ground.[10] Although he did not freely discuss shooting down his enemies, Yellow 13 was otherwise affable and came to support San Salvacion civilians, such as the Side Story Narrator, during the country's occupation.[18] However, he became more focused on his missions and the safety of his squadron following the loss of Yellow 4.[10] In the wake of her death, Yellow 13's demeanor became more somber and serious. Like the rest of Yellow Squadron, he was killed in action over Farbanti by Mobius 1 on September 19, 2005.[3]

Yellow 4 was Yellow 13's primary wingman and the only known female pilot in Yellow Squadron. She and Yellow 13 had known one another before enlisting in the Erusean air force and had developed a strong, possibly romantic, bond.[1] Yellow 4, despite her outwardly gentle disposition, would not let any harm befall Yellow 13 either in the air or on the ground—she loyally remained by his side at nearly all times to protect him.[1][4] Yellow 4 was injured and her aircraft was damaged when an explosive planted by the San Salvacion resistance detonated on their runway. Regardless, she sortied with the rest of her squadron to defend against ISAF's second raid on Stonehenge.[8] However, the damage to her aircraft proved too extensive, and she was shot down by Mobius 1 on April 2, 2005.[9]

Yellow Squadron in formation on the east coast of Usea

A Yellow Squadron Su-37 returning to base after a mission

A member of Yellow Squadron sporting the squadron's emblem 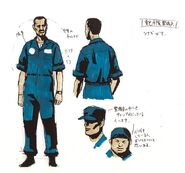 Yellow Squadron pilots practicing maneuvers over Stonehenge. The plane in front is Yellow 4.

A Yellow Squadron Su-33 in Ace Combat 6: Fires of Liberation
Add a photo to this gallery

Retrieved from "https://acecombat.fandom.com/wiki/Yellow_Squadron?oldid=264578"
Community content is available under CC-BY-SA unless otherwise noted.