Yoko was born on September 3, 1999.[1] In her youth, she was an assistant to Dr. Schroeder of the Erusean Air and Space Administration during the Lighthouse War alongside Simon Orestes Cohen.[4] She had a pleasant relationship with the two granddaughters of the Erusean test pilot Mihaly A. Shilage, who were at the same testing ground.[5]

She left the EASA after the war and attended the Accel University, and in 2025 graduated with a doctorate in brain physiology.[citation needed] Afterwards, she joined General Resource, where she would begin research into the concept of sublimation, the copying of a human consciousness into digital information. During her stay at the company, she met Abyssal Dision, and the two started a relationship.[2]

By 2030, top members of General Resource had decided that Yoko's research was too dangerous and opted to terminate Yoko's research by killing her. While she was in a research facility with Dision performing the first sublimation experiment, General Resource operatives covertly planted a bomb outside of their room. The bomb killed both Yoko and Dision, but the sublimated version of Dision, who witnessed the event from security cameras, continued to exist in the electrosphere.[2]

Simon Orestes Cohen had a relationship to some extent with Yoko, and planned to exact revenge on Dision for stealing Yoko away from him by attempting to delete his sublimated copy.[6] It is unknown if Simon followed through with this plan. 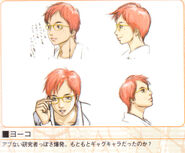 Retrieved from "https://acecombat.fandom.com/wiki/Yoko_Martha_Inoue?oldid=248460"
Community content is available under CC-BY-SA unless otherwise noted.