watch 02:45
Wiki Targeted (Games)
Do you like this video?
Play Sound
pencil
All right, gentlemen, it's time to clean house!
This article or section may require a cleanup to meet Acepedia's quality standards.

Circum-Pacific War
The Yuktobanian Navy, is the world's second largest naval force. Their naval competitor is the Osean Maritime Defense Force. Their carrier battle groups are centered around one to two Admiral Kuznetsov-class aircraft carriers and several other supporting vessels. One of these notable aircraft carriers is the Admiral Tsanev (sunk) during the Circum-Pacific War.

In 2010, Yuktobania has an attack against Osea. This was executed after they first gathered information on certain military bases within Osean territory. The first attack was on the naval base of St. Hewlett and the 3rd Osean Naval Fleet, with emphasis on destroying its aircraft carriers. Though Yuktobanian naval aircraft sunk many ships in the battle, a small Osean battle group escaped the port and sunk several Yuktobanian ships with support of the Osean Air Defense Force.

After learning that the OFS Kestrel and two other aircraft carriers survived their first attack, they ordered an attack and wipe out the battle group as it sailed into Osea's inland Bennion Sea. After the OADF defeated several waves of naval aircraft, the Yuktobanian Navy opted to launch two burst missiles at the carriers. The Kestrel survived the second attack, but two Osean carriers, the Vulture, the Buzzard and the Osean destroyer Finch were sunk in the attack.

The next attack by the Yuktobanian Navy was a mass deployment of their amphibious assault fleet and several aircraft to capture the vital Sand Island Air Force Base, which Yuktobania had failed to destroy the base twice before. After Osean aircraft destroyed a large portion of attack ships, amphibious assault ships and aircraft, the Scinfaxi, a underwater carrier, surfaced to help and win the battle. However, it was detected by Osean forces and damaged by the Osean space plane Arkbird, forcing it to surface, where it was destroyed by the Wardog Squadron.

Yuktobanian offensive operations have been ceased for several weeks, allowing Osea to launch an counterattack and establish a forward operating base on the Yuktobania mainland. Though Osean forces would make many gains on land in the next weeks, at least one Yuktobania fleet remained active in the Ceres Ocean.

Several Yuktobanian ships were found sailing inland rivers, and likely fought Osean forces in some capacity as they advanced. These ships mainly provided air defense to Yuktobanian bases, including a massive supply base. During the Osean Operation Desert Blitz offensive, a Yuktobanian battleship and frigate attempted to fire on advancing Osean forces before being sunk.

Much later in the war, the Yuktobanian Navy launched its last offensive operation in the Circum-Pacific War. They launched a great number of ships to sink the small fleet surrounding the aircraft carrier President Harling's OFS Kestrel. When the battle commenced, three loyalist Yuktobanian destroyers defected to the President Harling's OFS Kestrel battle group, followed soon by a number of others. With the help of Razgriz Squadron, the Yuktobanian fleet was defeated, but a Yuktobanian submarine sunk the Kestrel with two anti-ship missiles in the battle's aftermath. 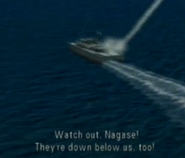 A-6E Intruder
Add a photo to this gallery

Retrieved from "https://acecombat.fandom.com/wiki/Yuktobanian_Navy?oldid=262672"
Community content is available under CC-BY-SA unless otherwise noted.