"A red aircraft? I've never seen a paintjob like that before."
― Ulrich Olsen[1]

Zone of Endless[9] (abbreviated as Z.O.E.) is an artificial intelligence developed by Gründer Industries. It was installed onto various aircraft and utilized in secret in 1998 during the Usean coup d'état.

Zone of Endless supported advanced maneuvers and was equipped with next-generation technology and aircraft, including the ADF-01 FALKEN. Despite this, Phoenix destroyed most of the Z.O.E. units during the coup d'état.

Over the next two decades, Gründer continued developing Zone of Endless and used Mihaly A. Shilage's flight data to improve the AI's flight patterns. The Z.O.E. versions using Mihaly's flight data were installed onto various UAVs and sent to Erusea. This version of Z.O.E. was then used to produce two ADF-11F Raven units with detachable ADF-11s. All of these drones were disabled or destroyed in the events of the Lighthouse War, with Trigger shooting down the two ADF-11Fs and two ADF-11s.

Gründer Industries launched the Zone of Endless project in complete secrecy just after the Belkan War ended in 1995. The Belkan Air Force was crippled after losing so many of its skilled fighter pilots in the war. Due to its low population, Belka found these pilots to be a very precious resource. Thus, the country was forced to adopt unmanned technology while training new pilots for the future.[10] Theodor Sander, a Belkan War veteran who joined Gründer's UAV development program, is believed to have contributed to the Zone of Endless project.[11]

Z.O.E.'s purpose as a pilot replacement AI was realized in one key feature: the ability to learn through consecutive battles. Z.O.E. can collect information from battles it participates in, analyze the data, and evolve to overcome its own weaknesses.[10] In practice, early versions of Z.O.E. would retreat when sustaining too much damage,[1][2] while later versions would use more advanced tactics and technology.[3][4][5]

Through unknown circumstances, the five Z.O.E. aircraft arrived on the Usean continent by May 1998. Phoenix engaged the F-14D during the battle of Meriton[1] and the F/A-18E during the battle of Skully Islands;[2] both aircraft retreated after sustaining critical damage. Despite ostensibly supporting the Usean Rebel Forces, the members of the rebellious Cocoon Squadron were unaware of Z.O.E.'s existence.[2]

Phoenix later engaged the Z.O.E. YF-23 while helping Pennant Squadron escape a Rebel ambush. The YF-23 shot down one of the Pennant planes before Phoenix shot down the YF-23 in an extended dogfight, marking his first kill against the AI.[3]

As Scarface Squadron and the Usean Allied Forces began to recapture Saint Ark in September 1998, the Z.O.E. F-15 S/MTD engaged Phoenix in a dogfight. Z.O.E. utilized advanced jamming technology to create false targeting boxes on Phoenix's HUD and radar, but Phoenix shot down the aircraft and continued the mission.[4]

The Z.O.E. ADF-01 attempted to defend Fortress Intolerance during the Rebel Forces's last stand. It featured the most advanced technology, including false targeting boxes as well as backwards-fire capabilities. Phoenix destroyed this final Z.O.E. aircraft as well, opening a path to attack Fortress Intolerance.[5]

At some point before the war, the Z.O.E. project continued development under the lead of Doctor Schroeder. The drones initially flew similarly to the drones seen in the Usean coup d'état, but they were deployed in much greater numbers and lacked the trademark crimson livery of the original drones. In addition, Schroeder utilized the skills of Mihaly A. Shilage and an experimental Su-30SM to gather advanced flight data to strengthen the drones.

One advanced UCAV prototype, the ADFX-10, was developed in small numbers and served to obtain flight data from both mobility and functionality tests, namely detaching from a RAW-F.[7] One particular ADFX-10 unit in the midst of a test flight was pursued by Cyclops Squadron. Trigger destroyed this drone during Operation Full House, but development continued.[6]

The ADFX-10 was finalized as the ADF-11, which was designed to work inside the body of the ADF-11F Raven. Two Raven aircraft—codenamed Hugin and Munin—were the only aircraft produced at the International Space Elevator to receive the final Z.O.E. data Schroeder gathered. Mihaly's granddaughter, Ionela, destroyed the drive containing the data. Avril Mead, Tabloid, Georg, Ionela, Ionela's sister Alma, and Schroeder destroyed the rest of the drone production facility while Princess Rosa Cossette D'Elise sabotaged the space elevator's power production.

To circumvent the loss of the data drive, the drones attempted to transmit their Z.O.E. data through the space elevator, attempting to send the information to all drone factories across the continent. Before they could succeed, a coalition of Osean and Erusean forces launched a desperate assault on the aircraft. Trigger destroyed both of the Ravens and both of the cockpit ADF-11s controlling them before any data was transmitted.

Z.O.E. originally appears as a recurring group of secret aces in Ace Combat 2. The player will receive medals for shooting down each Z.O.E. aircraft. The full list of Z.O.E. aircraft, and their ranks, is as follows:

Instead of acting as hidden aces (which the game still features), Ace Combat: Assault Horizon Legacy changed the Z.O.E. aircraft to be integral components of the story and required targets for the player to shoot down. This makes it impossible for the player to miss any of them, but they will still earn a Z.O.E.-related medal for completing the campaign.

All five Z.O.E. aircraft are capable of performing advanced maneuvers, even the initial F-14D. Only the F-15 S/MTD and ADF-01 units are capable of radar jamming that disrupts the player's HUD; it creates fake targeting boxes like those seen in "Blind Spot" in Ace Combat 5: The Unsung War. The ADF-01 is also capable of firing missiles and machine guns backwards until it is severely damaged.

The full list of Z.O.E. aircraft in Legacy is as follows:

Z.O.E. makes two appearances in the game's Extra Missions, which are considered non-canon to the main story.

In "Extra Mission 02", the player must shoot down a Z.O.E. ADF-01 that is flying fast through Seals Bridge Ravine. This ADF-01 uses the game's Color 1 for the aircraft instead of Z.O.E.'s crimson red livery. While its main purpose is to escape the ravine, the ADF-01 will still fire missiles and machine guns backwards towards the player.

In "Extra Mission 04", the player must shoot down the Z.O.E. ADF-01 defending Fortress Intolerance with no changes; it still features the fake targeting boxes and backwards fire. However, after the player makes a U-turn inside the fortress and escapes, four Z.O.E. ADF-01s will be waiting for them. These aircraft do not have the jamming or backwards fire, but they are all equipped with the Tactical Laser System. They are also not the same model as the ADF-01 that appears at the start of the mission or at the start of "Fighter's Honor"; their model more closely resembles the player's ADF-01 in Ace Combat 5: The Unsung War. One of the ADF-01s uses the plane's Color 6, while the other three use the plane's Color 5; if the player has customized Colors 5 or 6, it will be reflected in this mission.

Z.O.E.'s crimson red livery has been featured in other Ace Combat games as an unlockable livery, usually for the ADF-01 FALKEN.

Infinity also held a "Z.O.E. PROJECT" Online Co-Op Missions Ranking Tournament where players could earn the Z.O.E. livery as skins for the F-15 S/MTD, the F-14D, and for the first time, the F/A-18F Super Hornet and F-22A Raptor (replacing the F/A-18E and YF-22 from Ace Combat 2). The tournament also featured related emblems and nicknames for players to use, including "Evolving Combat AI" and "Self - Propagating".

In addition, Z.O.E. appears as an enemy unit in the bonus missions for Ace Combat X: Skies of Deception ("Operation X") and Ace Combat: Joint Assault ("Operation X" and "Ace of Aces").

ADF-01 Z.O.E. Commander
Add a photo to this gallery 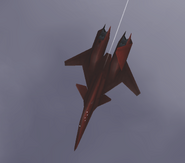 The Z.O.E. ADF-01 in front of Fortress Intolerance
Add a photo to this gallery

ADFX-10 with the "Z.O.E." emblem faintly in the center of the airframe

The ADF-11F Raven in the traditional Z.O.E. red paint scheme

ADF-11F with the Z.O.E. emblem
Add a photo to this gallery

Retrieved from "https://acecombat.fandom.com/wiki/Zone_of_Endless?oldid=262429"
Community content is available under CC-BY-SA unless otherwise noted.