The AV-8B Harrier II plus, sometimes abbreviated as AV-8B+, is an upgraded variant of the AV-8B Harrier II. It has a few improvements over the original plane, including an FLIR (forward-looking infrared camera), an upgraded cockpit with compatibility for night vision goggles, a more powerful engine, and an advanced radar.

AV-8B+s were utilized in the Lighthouse War by Erusea during Operation One Pair,[3] Operation Siren's Song,[4] Operation Magic Spear,[5] Operation Werewolf,[6] and Operation Giant's Step.[7] Following the collapse of Usea's satellite network, the reestablished Voslagian Air Force gained access to two AV-8B+s and were used in the defense of Shilage Castle during Operation Beehive.[8]

Harriers were utilized during the New Russian Federation uprising.

『This attacker was developed to make VTOL (vertical take-off and landing) a reality. It has a unique design featuring high mounted wings and four rotating nozzles. This makes it possible to operate in limited spaces such as light aircraft carriers and small airfields. The aircraft is commonly known as the "Harrier".』
― Hangar

The AV-8B is available through the Aircraft Tree. 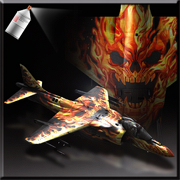 The Harrier is not available to the player in this game.

The AV-8B+ is not available to the player in this game.